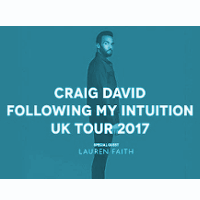 Craig David is back and set to turn up the heat at the SSE Hydro Glasgow on 3 April 2017.

Pioneering sounds from the garage era, fused with his soulful R&B styles, Craig David is still born to do it.

‘Following My Intuition’ is Craig David’s latest album and it features a superb mix of new cuts featuring some top collaborative talent, including singles ‘When The Bassline Drops’ featuring Big Narstie. It’s also got the new single ‘Ain’t Giving Up’ with Sigala and the tune ‘Nothing Like This’. It’s Craig David’s first studio album since his 2010 release ‘Signed,Sealed, Delivered’.

Recent stints at V Festival have shown he’s still got the chops, and his TS5 live DJ shows have seen him grace the stages of Miami, Manchester and Brixton.

Get your tickets to his Hydro show now.