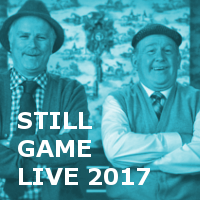 Still Game returns to the SSE Hydro Glasgow in February 2017.

Following a record busting run of 21 shows back in 2014, Scotland’s favourite comedy returns to the live stage of the SSE Hydro Glasgow.

Ford Kiernan and Greg Hemphill are back on our screens and have announced the plan for the epic stint in Glasgow from 4th February 2017.

All your favourite Still Game characters, including Boaby, Winston, Tam, Jack, Victor, Navid and Isa will be back in this new live show.