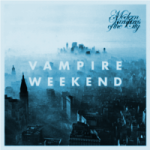 Fresh from stints at Glastonbury and supporting Mumford and Sons at their Olympic Park Summer Stampede shindig, the hot Brooklyn act Vampire Weekend are showcasing their amazing third album on this upcoming string of arena shows.

Playing at Glasgow’s The Hydro venue on the Friday 15th November the band will be dropping tracks from ‘Modern Vampires of the City‘ and from their earlier Contra and self titled albums. Lead by Ezra Koenig who met Chris Thomsen and bonded over a mutual affection for Punk and African music, their early releases like A-Punk, Cape Cod Kwassa Kwassa and Oxford Comma spread via word of mouth and Internet interest, building them a solid fan base ahead of the debut albums release. Constant gigging in the US and over here cemented their reputation and dispelled some of the early backlash the group copped. With their third album hailed a classic from all corners the band are really coming into their own now, with this tour being the prime chance to catch them live.